Given recent times, this may be one of the most important posts your GTG presents. In the last while we’ve had baby dolphins dying in Argentina and now baby bison dying in Yellowstone at the hands of uninformed visitors. in fact, just in the last week a tiger temple in Thailand popular with tourists is reportedly shut down and under investigation over endangered animal trafficking  allegations. All of these animals  have one thing in common, they are rare and disappearing. This round your GTG gives a few dos and don’ts to save some amazing creatures that are under enough pressure as it is.

Ok so normally your GTG is all for breaking the rules within reason, let’ face it, it’s usually much more fun. In this case though, the locals are the ones who know the risks both to you as a visitor and to the local fauna so probably a good idea to follow their lead. Quick disclaimer, this doesn’t include following the Spaniard’s advice and throwing yourself in front of 600kg bulls…. In the case of the great bison for example, Yellowstone advises keeping a distance of at least 22m. On the plus side those magnificent creatures are large enough to spot and snap on camera from that far so you’ll still have the obligatory bragging rights on social media.

So basically, the baby dolphin in Argentina died because someone picked it up out of the water to take a photo. The real problem happened when the poor thing was passed around a growing group of curious onlookers who aaaaallllll needed to get their selfie. Your GTG says don’t be that guy or that gal. Your selfie won’t feel quite as special when a whole other bunch of people have it anyway

So in some places the local tourism sector has created great programs to protect the animals they know to be at risk. If you’ve got a few spare then why not chip in? You may even get a cool photo, t-shirt or some other memento to let everyone know about your animal philanthropy.

If you’re friends think that a selfie with a tiger or riding a captive elephant is a pretty awesome thing, that’s probably because in their natural state they are wild and potentially dangerous. Your GTG confesses to both experiences which is how I can honestly say it ain’t so cool. Basically, if you are able to get that close to a wild animal then something is a little fishy.

Do-enjoy the experience of animals in their natural habitat

Tours like a responsible safari or a nice walk through a national park can give you the perfect chance to see how  animals live with (optimally) minimal human intervention.

So this does double up on the first point but it seems to be one of the rules that visitors break most frequently. Ignoring this advice can mess up the nutrition of an animal, or even have them following you back to your hotel. The point your GTG is making here is that as soon as you feed wild animals, they bother less to find  their own food naturally and end up eating food that could make them sick.

Do- Check it out

For this point your GTG recommends a little DIY detective work. A simple visit to the website of the tour you might be doing, or to a WWF website may give you some useful pointers as to how animals are housed, fed and have been found. Your trusty guidebook may also have some handy hints, especially when it comes to local endangered animals.

There are may ways we can share the huge planet we inhabit with our feathered, furred and fin-bearing friends. The most effective way is to keep a respectable distance where possible, it’s how our ancestors did it before the time of zoos so it must be good enough for us 🙂 If you have any questions for your GTG, feel free to use the contact form below to get in touch. On that note, as always, stay informed, travel hard and travel well. Till next time! 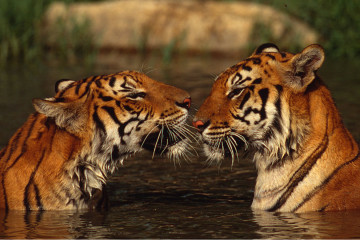