Welcome back globetrotters and I hope your arms and wallets have recovered from the copious vaccination injections recommended last week. This week we celebrate the handmade and the historic as we take a look at the largely European phenomonon of walled cities, fortresses and castles (Asian and other continental examples will be explored in a future entry).

We in the Eurocentric world may commonly associate castles with the likes of Rapunzel, and the kings and queens of fairytales, but these days you’ll only have to share your fantasy with other punters like yourself. No matter your background, these structures are a source of wonder, enchantment and a piece of history you can experience first hand.

Why are they there? 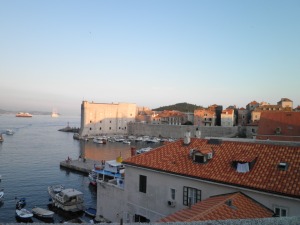 After the fall of the Roman empire (around 337 AD following the death of the emperor Constantine FYI) there were a large number of fortified remains that had been built during that time which became the earliest fortifications of the middle ages (5th century-15th century). As the middle ages progressed and feudal systems grew in their complexity, nobles and gentry built castles to protect their local interests. On the Iberian peninsula (basically Spain and Portugal), castles and fortifications were commonly built both by the Islamic Moors and by their opposition with the intent of crushing the Moorish advance. Each particular example has a history of its own, Obidos in Portugal comes to mind as one that was built specifically as a wedding present for a member of the royal family.

What were they made of?

The Norsemen (Vikings) of Northern Europe used a combination of stone and wood, similar to a style that was already found in England and the Slavic nations. In the Mediterranean, scarcity of wood supplies left stone as the most available building material. Further East an older style of earth and wood contruction called grod, was more common, as were wooden structures in general elsewere.

Currently,whilst maintaining a degree of their traditional integrity, these magnificent edifices serve primarily as tourist attractions and historical monuments. Visitors are often invited to visit these sites with the guidance of a tour or informational brochure in the spirit of bringing history to life. In some cases, visitors are permitted to walk along the top of the walls, offering a unique aerial view and a romantic sense of grandeur.

So as we leave you once again, enjoy your brush with history as you plan your wall to wall pilgrimage.

← Healthy, not so wealthy, but wise- Your GTG’s quick guide to travel vaccinations
One moment in time… →