Bringing funny (and sexy) back this week, the GTG visits the worlds three leading festivals dedicated to the comedic arts that stand in a class of their own. For diplomatic purposes these have been presented in alphabetical order…

Held mostly through the month of August (2 – 26 August this year), the Edinburgh Fringe festival is arguably the most enlightened event to reach British shores (with admitted tough competition, sorry Shakespeare). The mother of all festivals, in the words of the festival society;

“Our story dates back to 1947, when eight theatre groups turned up uninvited to perform at the (then newly formed) Edinburgh International Festival, an initiative created to celebrate and enrich European cultural life in the wake of the Second World War. Not being part of the official programme of the International festival didn’t stop these performers – they just went ahead and staged their shows anyway. Year on year more and more performers followed their example and in 1958 the Festival Fringe Society was created in response to the success of this growing trend.

The Society formalised the existence of this collective of performances, provided information to artists, published the Fringe programme and created a central box office. Its constitution was written in line with the ethos that brought these theatre companies to Edinburgh back in 1947: that the Society was to take no part in vetting the festival’s programme. To this day that policy remains at the core of our festival and we’re proud to include in our programme anyone with a story to tell and a venue willing to host them.”

This spirit as noted is still highly evident in today’s fringe. Events include stand up comedy, improvised (and improvised musical) comedy, cabaret, galas, late-night shows, pod-casts, street theatre, and other forms of comedic entertainment (if there are any).  During fringe season, every backroom and pub basement in the city becomes a stage, giving visitors and locals occasion to explore the city in a completely new way. 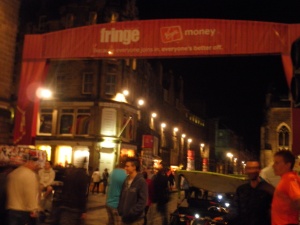 Held in Melbourne, in the state of Victoria, Australia, the festival in this, its 27th year will be held from the 27th of March till the 21st of April, during the Australian Autumn. The Melbourne International Comedy Festival aims to: discover, develop and showcase great talent for the entertainment and inspiration of a broad based audience.  If you’re wondering whether you’d fit in here, the festival has conducted an audience profile for your reassurance…

Currently fitting into three of those categories myself (which ones you say), it is safe to say the audience may also be a little broader than they may have anticipated… Acts here range from stand-up comedy, cabaret, theatre, street performance, film, television, to radio and visual arts. One special feature of the Melbourne festival is the annual roadshow that visits places in regional Australia, (and apparently Singapore and Hong Kong) featuring 4 highlight acts from the festival who share a van, road-trip style. Other special features include the ‘RAW’ open mike comedy competition, ‘Deadly funny’ comedy workshops and showcases for indigenous Australians, and ‘class clown’ competition for school students, held outside the festival season which are an opportunity for up and coming talent to receive some audience time and kick start their careers.

The ‘Just for laughs’ Montreal international comedy festival is held in July in Montreal, Quebec (la belle) province, Canada and  has a 3-word mission statement, “make people happy”. This year the festival has been broken into four sections.

Just for Laughs was founded in 1983 by Gilbert Rozon as a two-day Francophone event. In 1985, Andy Nulman joined the festival’s staff and introduced Anglophone events as well; under Nulman’s stewardship, the festival increased to a full month, with French-speaking performers during the first half, and English speakers in the second half. International and non-verbal acts (acrobats, pantomimes, etc.) are scattered throughout the program.

Each day, street performers, “New Vaudevillians” and other acts both vocal and visual perform throughout the city, particularly in the “Latin Quarter” — an area known for its theatres, cafés and boutique shopping. In the evenings, the nightclubs and live venue theatres offer special programs supporting the performers. Although Just for Laughs attracts spectators from around the world, many of those in the audience are talent scouts, booking agents, producers and managers from the entertainment industry. Performing at the festival is one of the biggest opportunities for undiscovered talent to showcase their act in front of industry professionals.

The Just for Laughs festival also has the Comedia comedy film festival component, which started in 1996. It gives awards for feature and short films. 2005, Comedia screened 125 short films from around the world as well as several feature length films.

In February 1994, the festival sponsored a splinter project in Hollywood, Florida. That coastal area is a favourite winter destination for Quebecers who head south to vacation in the warmer weather. The event, Juste Pour Rire – En Vacances (Just For Laughs – On Vacation), was held in the Young Circle Park, an outdoor venue with an urban park setting.

In July 2007, Just For Laughs celebrated its 25th edition, launching a festival in Toronto, Ontario. In 2009, the Chicago festival was launched and aired on TBS.

The festival this year is based around 8 main shows that progress seasonally throughout the festival. Many shows are of a gala nature, presenting a variety of quality stand up comedians, highlights of 2013 include the muppets, who hosted a comedy gala at the 2012 festival. Performances this year encompass Matinees and evening shows, and even hairspray the musical en Francais! Bi-lingual comedy in French and English is one of the particular attributes that distinguishes this festival.

So for comedy fans, get planning, and check out the links to the homepages of all of these festivals on the GTG

← Would you could you on a…..? Novel ways of seeing a city
Cultural snapshot- the Scottish highland games (Would you like to me crush him like a wurm?) →