While this article was Originally written as a guest post for the fabulous almost organic traveller site, I thought I would start my city guides with one I have thought about already, as they say ‘here’s one I prepared earlier’.

Where is it? -Serbia, 69 Km NW from Belgrade (the capital)

Why go? – ‘EXIT’ Music festival
– The Danube river
– The food
– The price is right
– The summer is hot hot hot

When? – Before and during/ during and after the ‘EXIT’
Festival (usually July)

Ok so now we have the essentials out of the way let me persuade you further. Having been on and off the road consistently since 2008 I can safely say this part of the world is one of the luckiest and most unexpected surprises I have come across.

Taking many things into consideration like the recent ‘homeland war’ of the 1990’s and not the strongest economical position, Serbian people seem to carry themselves with a sense of pride, dignity and love for life that is clearly visible to visitors.

Novisad itself is known internationally for ‘EXIT’ but seems to be respected locally for its university which combine to form a fabulous and light-hearted festive atmosphere.
A ‘city beach’ situated on the Danube provides a novel place to cool down in the summer heat which I would describe as “pleasant in moderate doses.”

For Australians it is similar to our dry summer heat, you will also feel at home in the outdoors and ‘happy go lucky’ vibe. To continue in a similar theme, cold drinks are also held in a high priority and I was lucky enough to be offered at a simple restaurant for my drinks to be kept cold even though I was clearly planning to drink them elsewhere. What you may find different is a lesser presence of air conditioning, I feel obliged to suggest that they may breed them tougher in Serbia despite what we Aussies think…

The ‘tree of life’ which is basically a shady tree in a university campus courtyard with an attached bottle opener serves as testimony to Serbian humour and sociability. 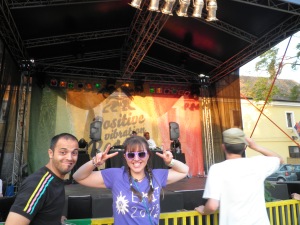 -The first outstanding thing about ‘EXIT’ is the venue. It is held in the Petrovaradin Fortress, making use of all parts including the dry mote (which is used as the ‘dance arena’).
-The next significant thing is the high number of locals at the festival, which is reassurance that the festival is not severely overpriced or abusive of the local community.
-The festival is predominantly a dance music festival, but many alternative stages exist including a ‘positive vibrations’ reggae stage and a stage specifically for local bands.
-Past acts include David Guetta, Groove Armada, Jamiroquai, MIA, House of pain, Fedde le Grande, Hadouken, Pulp and Arcade of fire amongst many others.
-Accommodation can be sourced through the festival website, with the university campus and a tent ‘exit village’ being the two main alternatives. Be prepared to rough it and alter your expectations as a shared shower sectioned only by a shower curtain from the neighboring room was just one of the surprises awaiting us.
-The festival generally gets lively around 11pm and continues in full swing until 6am when the sun rises and things settle down a little bit.

Local encounter
After the first day of festival going my travel companion (and best friend) Jess and I decided a decent and hearty meal was in order. Following a search of the area in almost 40 degree heat we decided to try our luck at a building next to the university where we were staying. Despite the building saying restaurant we were still doubtful as nothing inside it seemed to resemble one. The fountain situated in the main entrance did nothing to boost our confidence. Persevering up the stairs we came upon a glass door that still did not convince us and after some investigative peeking on Jess’s part we went in. We were shocked to be greeted by snappily dressed waiters and a somewhat empty place. Next we were given menus and Jess began the fun of sourcing a vegetarian option. We were talked through the options in great detail but it was lost on us as the waiter serving us spoke very limited English. So you can imagine our surprise when before placing a final order 2 cold beers arrived at our table… A gentle panic began to set in as course after course continued to arrive, entrée, bread followed by a main of stuffed capsicum (pepper), and a desert of what can best be described as Serbian Baklava. The biggest surprise came when whilst contemplating getting the bill the head waiter approached our table introducing us to the business owner who then explained to us that for us today “the complete menu is free”. Naturally we assumed there must have been some mistake but we left the place thrilled with plenty of time for them to ask us to pay as they got the door for us on our way out.
 

In between festival-ing make the time to have a look around at the amazing central market, city squares, parks and other hidden treasures. Overall, I challenge you not to go weak at the knees for every part of Novisad, from the sizzling summer climate to the handsome and laid back locals; and I know of no one who has ever been disappointed with their experience.